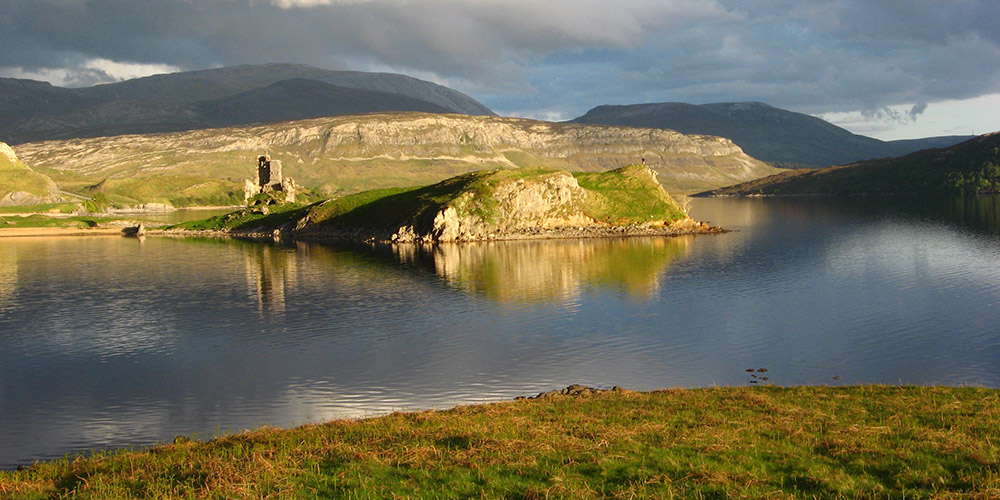 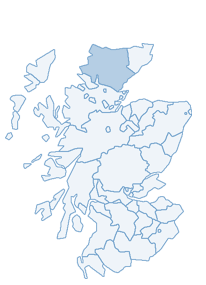 Click the map to explore Sutherland in Google Maps

Bens and glens and seascapes unsurpassed by anything of its kind in the Highlands.

This wide expanse of the North mainland offers space and tranquillity unlike that found anywhere else. Today the resident population is around 13,500 people.

The more densely populated districts are along the Eastern seaboard: Helmsdale; Brora; Golspie and Dornoch. It is this area that was identified as the Sooth (er) lands when the Vikings sailed south along the lea shore of Caithness.

The North and West are known as MacKay Country and Assynt – which was traditionally a stronghold of the MacLeods.

Local place names are helpful in illuminating the waves of settlement that have created and are creating the current landscape.

“Sutherland is a wide, desolate and beautiful County, certainly the most desolate if not the most beautiful of all Scottish counties.”

As the words desolate and empty are used again and again to describe this Northern County it is necessary to investigate and understand why we have the lowest density of population in Europe.

There are several excellent publications which focus on the imported ideas of “Agricultural Improvements” which led to the widespread clearance of people from settlements throughout the whole county. Some of the earliest Highland Clearances took place in Sutherland in the first few years of the 19th Century and in one month parts of the Parishes of Golspie, Rogart, Farr and the whole of Kildonan were ruthlessly consigned to the flames.

Books worth reading include:

Perhaps the most powerful statements come from eye witness accounts and there are two moving publications which throw light on this widespread injustice:

This is how the Rev. Donald MacLeod describes what he sees of clearance activity in Strathnaver:

“The consternation and confusion were extreme; little or no time was given for the removal of persons or property; the people striving to remove the sick and the helpless before the fire should reach them; next struggling to save the most valuable of their effects. The cries of the women and the children, the roaring of the affrighted cattle, hunted at the same time by the yelling dogs of the shepherds amid the smoke and fire, altogether presented a scene that completely baffles description – it required to be seen to be believed. A dense cloud of smoke enveloped the whole country by day, and even extended far out to sea; at night an awfully grand but terrific scene presented itself – all the houses in an extensive district in flames at once. I myself ascended a height about eleven o` clock in the evening and counted 250 blazing houses, many of the owners of which were my relations, and all of which I knew personally, but whose present condition – whether in or out of the flames – I could not tell. The conflagration lasted 6 days, till the whole of the dwellings were reduced to ashes or smoking ruins.”

It is well worth visiting museums and community history displays to gain a local understanding of the effects of these events.

Central to this is the creation of the crofting landscape:

“the crofting township is a tight social unit, simply because it is the folk of the township who are the dynamic elements; the physical  environment is merely a stage setting.” *

But it is on this stage over many years that a communal way of life has created the cultural or humanised landscape that we see today.

“The crofting township is not yet the anachronism some agro-economists would make it out to be, for many communities still display a strength of purpose, a resolution and a powerful sense of identity which is no bad thing in these days when the remote political administrator is set on reducing people to numerators in an overall planning exercise.

Happily, in many townships of the present day there still exists a significant social bond which has always been characteristic of people whose history almost dictated that they work and sing together – that or die.”

There is much in this vast county to see, experience and understand. Take time to talk to people, attend the various community celebrations and events– Highland Games Days/ Feisan/ Galas/ Sheep dog trials/Ceilidhs and music nights. Almost every township and village no matter how small has a public hall where you can share with the community in everything from bring- and- buy sales to theatre. Look out for local posters or check out the press which covers the area – The Northern Times (weekly); Am Bratach (monthly); John o Groat (weekly); Assynt News (monthly).

Early transport was by sea so you will find harbours all the way round the coast. Lochinver and Kinlochbervie are our largest fishing ports. The smaller harbours may offer opportunities for boat trips.

Each of our coastlines offers magnificent sandy beaches with barely a soul on them. There are salmon rivers, trout lochs and sufficient moorland and mountain walks to last a lifetime.

We have three National Scenic Areas and a Geo Park to explore which has been claimed as Europe’s finest scenery – you decide.