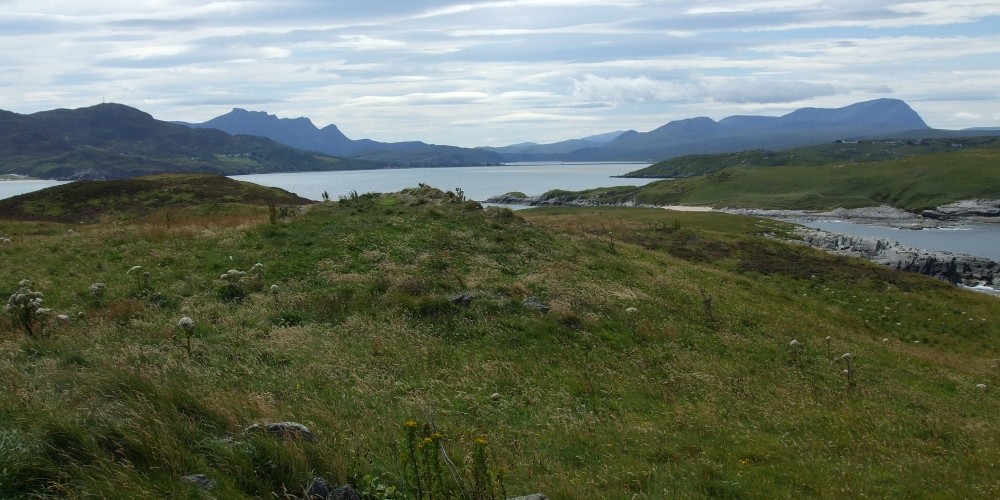 Crofting in a nutshell.

Croft in Old English and Croit (Gaelic) – small piece of arable land.  Also in Gaelic to mean a “Crook Backed attitude assumed by man and beast when exposed to cold piercing wind” Dwelly. In other words, a pretty miserable bit of land.

A Croft in modern term logy is an enclosed area of (usually) agriculture land. The adage that a croft is an area of land surrounded by legislation is not far off the mark either. Crofting has its own rules and laws of which security of tenure is by far the most important.

The ancient way of the people was that of Clachans. Two or three houses built in close proximity to each other. In-by pasture comprising riggs and small enclosures. The settlement being defined by an enclosure dyke built of stone and turf. Communal use of the land was the norm as was the herding of animals. They were tenants at will under the tacksman and wadsetter, but secure enough in an age when how many young men could be raised to the call of the chief was number one priority. Hill Pasture. Hill land out-with the enclosure. Sheiling or Araidh. Distant summer pasture to which people would transhumant, each community would have its special place, where (mostly young) people would stay during summer months, herding, milking the cattle and preserving this by making butter and cheese. It was where the young were free.

This was the traditional way of life in the Highlands of Scotland for hundreds of years.

The late seventeen hundreds brought great changes to agriculture throughout the country. The new thinking was to enclose land into individual farm units. Estates underwent “improvement.”

The best land was marked out into farms and let for higher rents. Inferior land and hill pasture was deemed best turned into sheep farms.

To create a sheep run, a vast area of land was envisaged. Sheep and a population were incompatible. It was necessary to get the people to leave to make the land clear for the incoming sheep. Thus did we get the term “The Clearances.”

The people had no security, their claim to the land was traditional and hereditary but in law this meant nothing. They had to go.

Some areas deemed not suitable for farming was set aside to absorb the influx of people being cleared. The old settlements were re- arranged. Land was marked out and enclosed into individual mini- farms. The term croft was used.

In Sutherland this was part of a deliberate policy to clear the population to the coast where they were given very small parcels of land, on this they had to build a home, enclose their allotment and attempt to bring it into cultivation while trying to earn a living by whatever means. The grand design was to turn this agritarial people into fishermen, immediately. After great hardship many did. Those who could not find a parcel of land left the area, usually in emigration.

Over time, a new generation fought against this injustice to an indigenous population and this resulted in the power of the estate being reigned in and the fear of eviction given over to history. This unleashed a surge of improvement to croft lands and houses.

Further changes came, especially in the wake of the Great War when “land for heroes” was the cry and the government stepped in and broke up some of the big farms and created new holdings. These tended to be larger units and more viable. Especially during the nineteen seventies and eighties it was the policy to enlarge crofts by absorbing other crofts. The downside of excessive amalgamation is that it reduces the population. Croft houses become holiday homes or occupied by people with no knowledge or desire to work the soil. Crofting dies. There is now the right to buy a croft and also to de-croft the land.

As you travel around the Highlands and you see crofts, you are looking at the remnants of a people and culture. But there is still a spark of life there yet, and who knows, a flame might re-alight.

If you are interested in the history of crofting there are many worthy books on the subject, call in at any library. Well worth a visit is the “Mart” in Dingwall where they have a very good display in their upstairs gallery. Also places like “Timespan,” Helmsdale for information on the clearances.

If you are walking the hills, especially in Sutherland, look closely at nearly every green that you come across, no matter how remote, and the chances are that the past will lie before you with the outline of the cleared houses, abandoned kilns, field enclosures and the settlement boundary dykes.

I am willing to take anyone on a walk if they wish to explore this past, (and I am still able) and to share what knowledge I have.