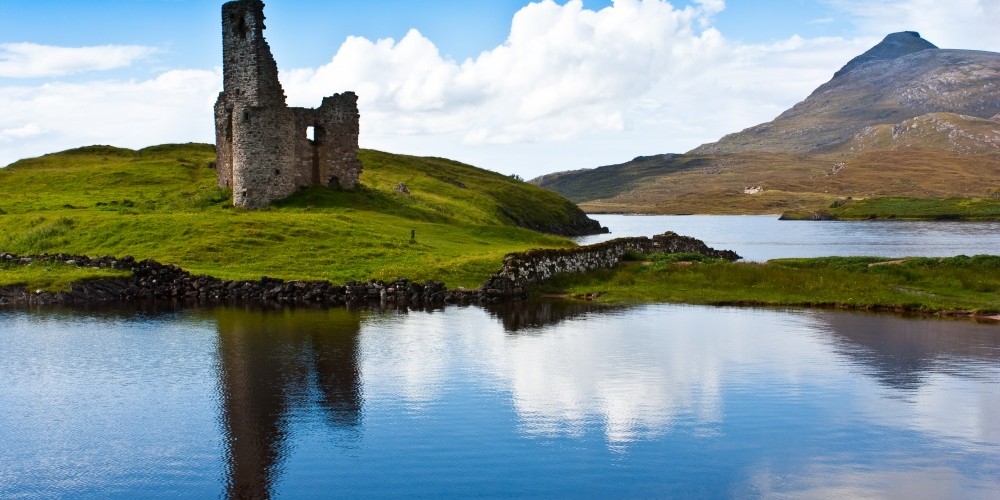 The vast majority of the place-names of North Sutherland are derived from Gaelic which, though it is now almost dead as a native tongue, was the dominant language of our area for almost all of the preceding millennium.  While these names may seem impenetrable to the visitor, they are usually transparent in meaning to the Gaelic speaker and are thus readily translated by those who have the knowledge.  Amongst the Gaelic names, and sometimes intermingled with them, are a stratum of names from another language, Old Norse, which has not been spoken locally for approaching a thousand years though it has left its imprint, in the form of loan words, in the Gaelic which succeeded it.  Also, there are a very small number of names, perhaps only one or two, which predate Gaels or Norsemen and are derived from a language and people whom we know almost nothing about.  Finally, there is a leavening of names in English and Scots which have mostly found their way in to this northern corner over the past two hundred years.  All landscape names reflect the linguistic history of their place and the great majority of them, regardless of which language they derive from, are merely descriptive of the location or feature to which they are applied.  As well over a thousand names are recorded locally on Ordnance Survey maps, and even more are extant in folk memory, those listed below are just a few examples to illustrate something of the richness that exists.

Allt Innis Ceann an Locha – Burn of the meadow at the head of the loch.  From Gaelic allt = burn or stream, innis = meadow and ceann = head.

Bettyhill – English, from the personal name Betty and the landscape feature hill.  It is widely believed that the place is named after Elizabeth, Countess of Sutherland, the architect of the Sutherland Clearances, who allegedly founded the settlement and wished it to be called ‘Mount Elizabeth’.  The people derisively called it Cnocan Betty = Betty’s little knoll, which was then translated in to Bettyhill.  However, it appears on maps from before the Countess’s time as Beattie Hill so all we really know is that the Countess story isn’t true and that the name element may not be Betty at all.

Halladale – Old Norse from Helga= holy and dale= valley. A thirteenth century Vatican manuscript lists a contribution towards the Crusades from Haludal and the earliest maps of the area show a chapel there, both facts supporting this interpretation.

Naver – This name is believed to predate any known language of our area. It is applied to the largest North Coast river and, in combination with the Gaelic Strath, also to the valley through which the river flows.  It was recorded by Ptolemy in 140AD, along with a few other Scottish river names, and scholars have long believed that it derives from the root word nabh= cloud, or wet cloud in the ancient languages of Greek, Latin and Sanskrit. That interpretation is now being revised but no definite answer exists.

Rough Haugh – English/Scots combination.  Haugh= low lying ground or meadow.  This precisely describes the part of Strathnaver it is applied to.

Tobar Mallaig – Gaelic from Tobar= well and Malaig= A formal version of a Celtic saint’s name, Mailie so Mailie’s Well, a place of veneration.